Take a look at my headshots.. rugged, sleak and chummy. Enjoy...

It really is such an honor to continue to interview people within Massachusetts, specifically within the field's of Arts & Cultural. There are so many people following their passion and helping others along the way. I have been blessed with the best guests in the world and will continue to improve my skill set so that our network will grow stronger and stronger as we all acheive our dreams for an inspired world.

..from the MAINE HERALD GAZETTE, this is part of a two-issue article about THE NIGHTINGALE SINGS, and indie short I filmed in Camden ME in August...

ROCKPORT — Fifteen-year-old Camden-area resident
Devin Fletcher was captivated by the opportunity to play the
lead role in a four-actor film by Maine Media Workshops
graduate, Director David Scott.
“I was immediately entranced by the storyline and a chance
to work with such a phenomenal crew,” said Fletcher, herself
a Workshops student, in an interview about the August shoot
of Scott’s short film, “The Nightingales Sing.” The film is an
adaptation of a… Continue

This group owes Brad and Christine a big "Thank You" for their efforts to organize and deliver a very informative and enjoyable event.

We learned a lot about how to get the most out of the New England Actors site, how people are getting work from it, and that it has spawned 'frites' (friend + sites) across the country.

One item of note for everyone: This site is a volunteer effort by Bradley -- he has spent enormous amount of hours, creating and maintaining the site. The… Continue

After 15 years in a wheelchair, I hit the ground not quite running, but walking fast through a series of adventures, exploring life’s possibilities, sampling like Goldielocks searching for what’s just right.

Informal education: Pinned to the ladies room door of a coffee house by Bob Dylan… Continue

Working in Ma as an actor. Newspaper article:

House Speaker Robert DeLeo was noncommittal when I asked him if he would support another effort to water down the tax credits. He said he needed to talk with his chairman on the revenue committee to make sure the program is effective. DeLeo was careful not to sound negative, though, and he conveyed an anecdote about one time earlier this year when he bumped into a number of Massachusetts residents happily at work on the makeshift set of a TV pilot at the State House.

Valerie Parker in the Boston Globe! "A fashionable mix of green living and high style"

Fashion doesn't have to be all about looking good. It can be about feeling good. 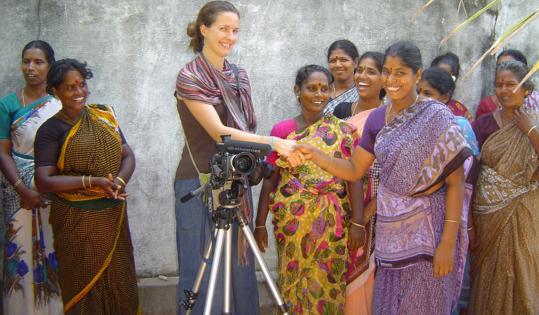 Valerie K. Parker of Lowell, filmmaker, activist, and social entrepreneur, says she fervently believes that stylish clothes that are also manufactured under safe conditions by people who receive a living wage make for the most beautiful attire.

I was recently hired by a Consulting Company doing research screening studies for the Police Department. They reviewed my neactor page information, contacted me and asked me to perform as a "role play actor". I had to portray a troubled character for a series of tests, interviews and evaluation of candidates to be hired as police officers.

In our actor's journey, one will never, ever know what the next job will be like.
I am grateful to our dear friend and talented colleague… Continue

I am excited about my new film coming out soon. The Kingsmens Redeemer. It could be one of the best projects I have or will work on. Fantastic crew, great director, excellent actors, and the most incredible script I have ever read. But then, I am biased. You be the judge. Check out the trailer at www.kingsmensredeemer.com.

Happy so Happy to hear of a movie being filmed in the Area and specifically at the Worcester Airport... I knew they would find something great for the space.. Hope to see you all there....

I'm happy to talk about this, this is a dream come true 4 me.
Okay its Ahura's film but can I tell you that he let me be 3
Characters in the film..taxi cab driver..a warrior women and
Well the 3rd..something Jackie Chan would love and I'm
Somewhere in the trailer but you got find me...okay
Instead of playing..where's Waldo..in Anikryua..let's
Play Where's Shelly Nun-Chucks???

I have to say I am happy to find a big brother in this industry who looks out
4 me and that man is Ahura Z.
I am blessed to know that I never have to audition our films and
I am even truly happier to know that at least the next 12 films Ill
Be a featured artist in all of them
2nd post...Anikryua...

....are there any union on "Grown Ups" today (7/28?) It appears that production used all the union people they were required to over the last week and have (and will) cast non-union for the remainder of the shoot.....comments?

Check out my blog: "scoopsoup"; New England film "scoop", links to casting and film sites, and more! All in one place!

Feel free to check it out..comment, subscribe and tell your friends!..: And soon to be posted: photos and interviews! get the scoop & buzz on down and click on "scoopsoup"!

Galileo, the Medici and the Age of the Telescope

This week it's off to Philadelphia to the Franklin Institute to participate in their opening of Galileo, the Medici and the Age of the Telescope. The Franklin and Fels Planetarium have managed to get Galileo's telescope for part of the International Year of Astronomy from the Institute and Museum of the History of Science in Florence.

I'll be giving my… Continue

Fellow actor Nicolas Villamizar is prominently seen on a video clip for the Burbank International Film Festival at Warner Brothers, CA, USA, for his role in "Henry." Visit Burbank Film Festival Then click on Photo & Video. Nicolas' scene is at 1:04 and the whole promo video is 1:37. Congratulations Nicolas!
Added by Bradley J. Van Dussen on December 9, 2008 at 11:30am — 1 Comment

A Matter Of Interpretation/ Ad Week/ Nicolas Villamizar, Sounds Good Productions/ Greenberg, Seronick Agency, Boston/
A Matter Of Interpretation
Publication: Adweek
Date: Monday, December 13 1999
Spanish interpreter Nicolas Villamizar is on a mission.
Every day, Villamizar said, he encounters ads improperly translated into Spanish. "It seems like there is an apathy, and it really hurts," he said. "I feel like I have a civic duty to make things clear."
Nicolas… Continue

Synopsis:
On August 2, 1947, an airliner took off from Buenos Aires for Santiago, Chile. It never arrived. Then in 1998, two mountaineers stumbled across a huge engine on the Tupangato glacier in the Andes. Despite thorough previous searches of the glacier, no wreckage had been sighted. The Argentine army led an expedition to the crash site, and, after extensive detective work, reconstructed the plane's final minutes and identified human remains. Finally, they came up with a surprising… Continue